Earlier in the week I promised I’d reveal my littles’ costumes. Sadie is going to be a bee, a cute little bee. This costume was super easy to make and very inexpensive. It didn’t really take a lot of time either. So here’s how you can diy a bee costume for your toddler.

I purchased the top and bottom a size larger than what Sadie is currently wearing because it’s usually cold on Halloween night in central Indiana. I could have gone another size larger, leaving extra room to layer up underneath her bee costume. Both pieces were purchased at Walmart for $3.88 each.

Did I tell you this is easy? Cause it is super easy!  Just lay the shirt on a flat surface and decide where you want stripes to be. I pulled enough tape to be longer than the shirt was wide, then applied it to the shirt leaving enough so the ends wrapped around and overlapped in the back.

For the neck area I cut slits and folded the duct tape inside.

Do the same for the pants.

There are a lot of tutorials out there to make tutus. We actually had this yellow tutu from last year when my oldest daughter went as Bat girl. I just adjusted the elastic waist band to fit Sadie. I was going to make the antenna but found this cute set with a fun stinger at Target for less than $5.

The wings came from the Dollar Tree, either there are a lot of DIY bee costumes or they didn’t make many in yellow, there were lots of pink and green wings there. Luckily I found a yellow one at the back of the rack. 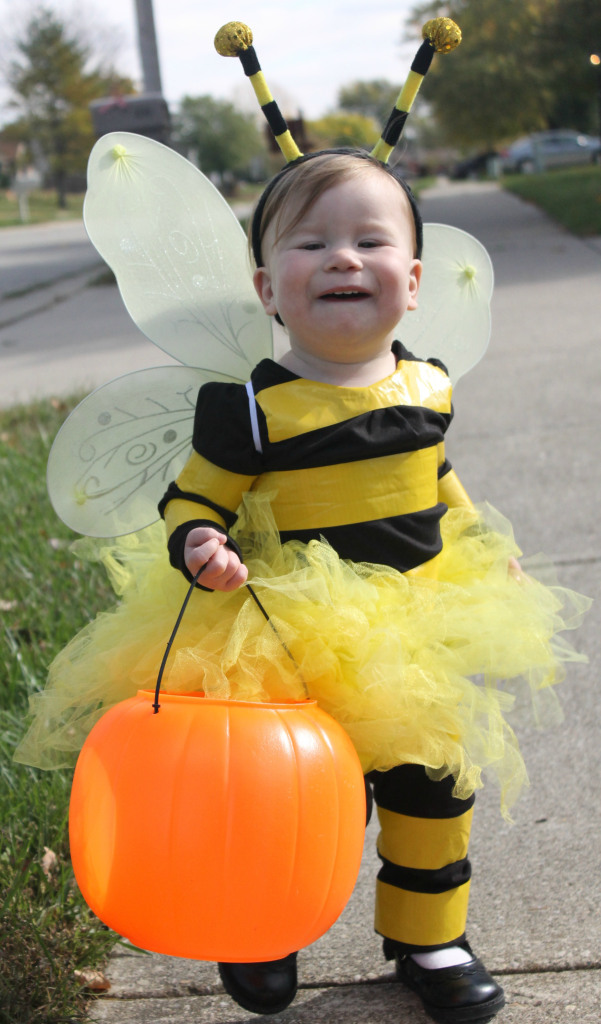 I took these photos right before lunch. Just as we were finishing up Daddy came home, the look on his face was priceless, I think the finished results were a success.

You can just barely see her little stinger in her tutu.

Come back later in the week to see what Nolan will be. In a corny way Sadie and Nolan’s costumes go together. Any guesses as to what he’ll be?

Thanks for stopping by At Home with Sweet T!!!